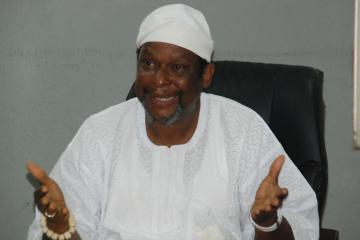 The Chairman, Senate Committee on Science and Technology, Senator Ajayi Boroffice, on Tuesday assured the leadership of the All Progressives Congress that the reported endorsement of the Senator representing Yobe North, Ahmad Lawan, as the next Senate President will not cause any rancour among the lawmakers from the South-West.

Boroffice, who represents Ondo North Senatorial District on the platform of APC, stated this after a meeting between him and Lawan in his office.

He said the fact that some members allegedly expressed reservations about the endorsement before the party leadership would release its resolution on the zoning arrangement for the presiding officers of both chambers of the National Assembly, should not be interpreted to mean a division in the rank of his colleagues.

He explained that all the returning senators and the newly-elected ones, who attended the meeting, overwhelmingly supported Lawan’s endorsement.

The senator added that a few members actually believed that the endorsement should have been deferred till when the leaders release the zoning formula, noting that the argument of the majority that the action be carried out immediately, actually prevailed.

He said, “There is no crack in the rank of the APC caucus in the Senate. We are a united force and we all believe and respect the judgment of our party leaders in the South-West. We will always speak with one voice.

“We have officially endorsed the ambition of Senator Ahmad Lawan, and we sincerely hope that our leaders in the party would zone the position of Senate President to the North-East as a way of fast-tracking rapid social and economic development in the region.

“It is a common knowledge that the people of North-East suffered great devastation as a result of the insurgency, which ravaged the entire area, leading to the death of hundreds of people and destruction of property worth billions of naira”.