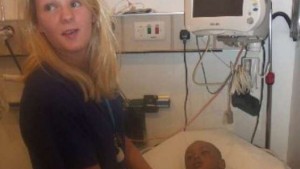 The very energetic Terry G wasn’t so happy at as his three year old son Rex is currently in the hospital.

The artiste posted a picture of his first child on a hospital bed with a white nurse attending to him.

“My prince is strong” wrote Terry G on Instagram.

Rex’s illness is thought to be serious, and is expected to be in full health pretty soon.

Rex was born in 2012 to Terry G and Mimi Omoregbe.

In a recent interview, Terry G said he was overwhelmed when he found out he was going to be a father.