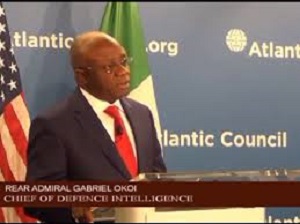 The Defence Intelligence Agency is leaving no stone unturned in ensuring it tracks the sources of funding for Boko Haram and terrorism in the country.

The Chief of Defence Intelligence, Rear Adm. Gabriel Okoi, said the DIA was taking steps to track the funds being used to perpetrate acts of terrorism in spite of the challenges inherent in the system.

Okoi said while the banking system made it difficult for such funds to be effectively traced, efforts were being made by the agency in that regard.

The Defence Intelligence Chief made this known while speaking with journalists shortly after the closing ceremony of the Deputy Defence Advisers/Attaches and Librarian training conference in Abuja on Wednesday.

When asked to comment on the most likely impact of the conference on the possibility of tracking funds used for the operations of Boko Haram and other terrorism activities, he said, “I think we should expect that we should have positive results from that end, we are doing something about it. It is not that we are not doing anything about it.

“We are doing something about it. It is just because of the system we have in Nigeria and the banking system does not allow you to really go into much of those things.

“They have been empowered now; we have given them all they need, we told them how they should go about intelligence gathering, so we expect positive results from them”.

Okoi added that the Defence authorities also created an opportunity for the spouses of the envoys to be included in some of the sessions to bridge the gap of training among them.