Home Metro News When I Leave, I Will Dedicate My Time To The Unity Of...
Facebook
Twitter
WhatsApp 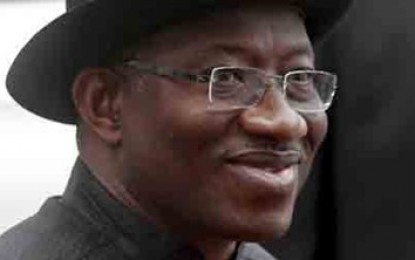 President Goodluck Jonathan today restated his reason for conceding defeat to president-elect Muhammadu Buhari following the March 28 presidential election. According to Jonathan, he did so because he had the love of the nation at heart.

“I took that decision because I told people around me that no matter the ambition, you must have the nation at heart. Even if I was going to be president for the next 25 years I won’t be happy if Nigerians are killed. Even among siblings, some turn to armed robbers while others turn into priests. God did not create me that way and I could not have fit in. Anything could have made the prediction of Nigeria’s disintegration happen. I cannot be a party to the disintegration of this country. We only pray that the in coming government will appreciate the contribution of everybody irrespective of creed, religion or tribe,” Jonathan said this when he was conferred with the Peace Loving Global Citizen Award by the Universal Peace Federation.

He noted that his eight years in office both as the Vice President, the Acting and finally as the president of the country was a big school that cannot be matched by any other school in the world.

“There is no school bigger than being in the presidency for eight years. When I leave, I will dedicate my time to the unity of this country.”

The president said that his party, the PDP, as well as his Vice president should also be commended because of the roles they played in entrenching democracy.

He called on the incoming administration to carry every Nigerian along so as to build a strong and united Nigeria for the future generations.