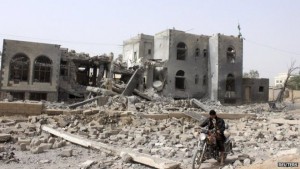 Leaflets were dropped in Old Saada in Saada province, the rebels’ stronghold. Houthi fighters have fired shells from Saada into Saudi Arabia in recent days, killing 10 people. Saudi-led strikes have killed at least 1,200 people, more than half civilians, the UN says.

The Saudis say their offensive aims to restore Yemen’s exiled president. The spokesman for the Saudi-led coalition, Brig Gen Ahmad Assiri, said Yemenis were being advised to stay away from Houthi strongholds for their own safety.

Mr Asseri said the overnight air strikes in Saada province were aimed at those behind the attacks on Saudi territory.

“Our work now is reaching those [Houthis] who planned these attacks and who are hiding in Saada, and the places where the militias are,” Gen Assiri told Saudi TV.