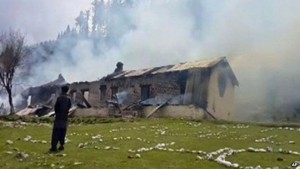 An army helicopter has crashed in a mountainous part of northern Pakistan killing seven people, including the Philippine and Norwegian ambassadors. BBC reports:

It crashed during an emergency landing in the Gilgit-Baltistan territory. The wives of the Indonesian and Malaysian envoys, two pilots and a crew member also died. They were to attend the opening of a tourism project.

The Pakistani Taliban said they were behind the attack, but the government dismissed any suggestion of foul play. Pakistan’s Defence Minister, Khawaja Asif, said initial reports suggest it was an accident.

This is one of the most tragic aviation disasters for the Pakistani military in decades. The last time one of its air crashes killed a foreign diplomat was in 1988 when a C-130, carrying then military ruler Gen Ziaul Haq, US Ambassador Arnold Raphel and several of the army top brass, crashed in southern Pakistan, killing all on board.