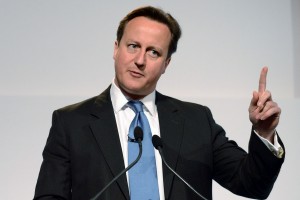 David Cameron has promised to lead a government for “one nation” and make “Great Britain greater” as he returned to Downing Street as prime minister. BBC was there:

Speaking outside No 10 after visiting Buckingham Palace, he said the UK was “on the brink of something special”. The Conservatives have 331 seats – five more than needed for a Commons majority – their first such victory since 1992.

The Conservative leader is now beginning the process of putting together the new government, which will have a parliamentary majority of 12. Senior Cabinet appointments are expected to be announced later on Friday. Mr Cameron said he would reach out to all parts of the UK and strive to “bring the country together” in the wake of the SNP’s election landslide in Scotland – where it won 56 of the 59 seats.