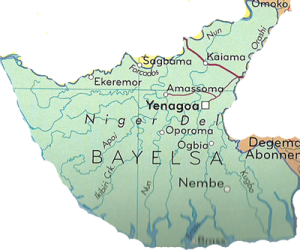 Nigerian youths today shut down crude oil production at two flow stations of the OML 29 (oil mining licence) near Nembe in Bayelsa state. The protest was to show they were against the sale of the oil block.

Royal Dutch Shell Plc sold its 30 percent stake in OML 29 along with the 60-mile Nembe Creek trunk line to Aiteo Eastern E&P Co, late March, for about $1.7 billion. French oil giant Total SA and Italian firm Eni SPA have also agreed to sell their 10 and 5 percent stakes respectively, to give Aiteo, owned by Nigerian billionaire Ben Peters, a 45 percent stake. The remaining 55 percent is to be retained by the Nigerian National Petroleum Corporation (NNPC) under a Joint Operating Agreement (JOA).

Shell has been a victim of several attacks from the Bayelsa youths, alleging neglect of the host communities by the company. But the oil major had often come out to refute this, insisting it had always fulfilled agreed sustainable community development projects under the Global Memorandum of Understanding (GMoU).

The company had in January agreed to pay $83.5 million as compensation for two oil spills in 2008 that destroyed thousands of hectares of mangroves and the fish and shellfish that sustained villagers of the Bodo community in Rivers State. It could pay more, following a leak within the Kolo creek oil field it operates in Ogbia LGA, Bayelsa. Shell said some 27 barrels of crude blend was discharged from the Kolo on April 15, 2015.

At the OML 29, which Aiteo now has substantial interest in, youths arrived in about 30 speedboats, holding up placards reading “Sale of our wealth by Shell is theft against mankind”, “We are angry” and “Nembe people reject sale of oil field”, according to Reuters.

A spokesman for Shell told Reuters that he could not immediately comment. Oseyemi Oluwatuyi of Aiteo Group’s Communications Department could also not be reached for comments.