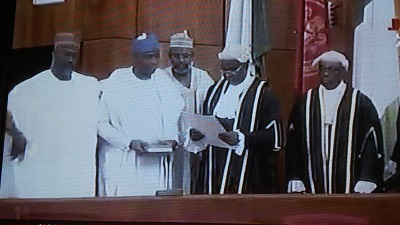 A wild jubilation broke out in the Senate Chambers on Tuesday morning as Senator-elect for Kwara Central Senatorial District, Dr. Bukola Saraki, was elected President of the 8th Senate, unopposed.

He was elected by 57 of 108 Senators-elect, with 51 others, including the consensus candidate of the All Progressives Congress, APC, Senator-elect Ahmed Lawan, absent.

The other Senators-elect were at the International Conference Centre where a meeting was called with President Muhammadu Buhari by the APC leadership, at the time Saraki was declared President of the 8th Senate.

The motion for Saraki’s nomination was moved by Senator Ahmed Sani Yerima and seconded by Senator Dino Melaye.

After accepting the nomination of his colleagues, Mr. Saraki was immediately called to the seat of the President of the Senate where the oath of office was administered on him  by the Clerk to the National Assembly, Abubakar Salisu Mai-Kasuwa.