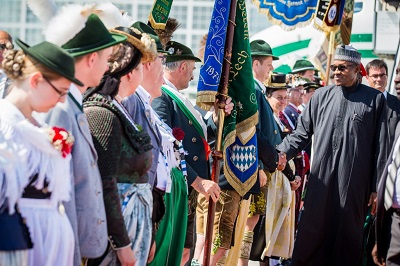 President Muhammadu Buhari arrived in Munich, Germany on Sunday to begin a two-day official visit in the course of which he will participate in the G-7 Outreach program for invited heads of government and global institutions.

The president during the course of his visit, is expected to present the “wish list” of Nigeria to the Group of Seven (G7) industrialized countries.

The British Prime Minister, David Cameron, whose country is a member of the G7, had last month requested the then President-elect to prepare a shopping list and come with it for their consideration in what is seen as an excellent goodwill gesture towards the new leader and the country.

The Senior Special Assistant (Media and Publicity) to the President, Garba Shehu, in a statement from Munich on Sunday, said top on the list of the requests Mr. Buhari will tender before the G7 leaders is on the problem of security.

“We have a problem which they know”, President Buhari himself said.

President Buhari said he has used every opportunity at his disposal ahead of this meeting to discuss the country’s needs with specific reference to terrorism and development needs at person-to-person meetings and phone conversations with some of these leaders.

“These development issues, many and varied as they are, touch on the economy, combating corruption, increased foreign direct investment, FDI; power and energy, infrastructure, environment, enhanced transparency in elections and good governance”.

He also announced that the leaders of the industrialized nations have shown a preparedness to work with Nigeria to help the country overcome her problems.

The President was accompanied on the trip by Governor Kashim Shettima of Borno State, former Lagos State Governor, Babatunde Fashola; former Chief of Army Staff, Gen. A. Dambazau (rtd.) and Permanent Secretary in the Ministry of Foreign Affairs, Amb. Paul B. Lolo.