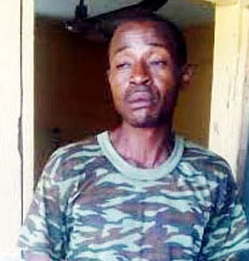 A member of a suspected robbery gang that specializes in wearing military camouflage to rob unsuspecting private and commercial vehicles trapped in traffic around Mile 2, Festac, Alakija and its environs has been arrested by the police in Lagos.

According to police sources, who spoke to VANGUARD, the suspect was a former soldier, who was dismissed from the Nigerian Army over unethical conduct.

The 43-year-old suspect, identified as Adokie Tombra, revealed that he wore the camouflage to avoid paying transportation fare each time he boarded a commercial vehicles.

The long arms of the law eventually caught up with him when policemen attached to Festac Division arrested him in full military fatigue while members of his gang were attempting to escape after a robbery operation.

During interrogation, Tombra reportedly said: “I resigned from the Nigerian Army several years back. Usually, I wear this Nigeria Army camouflage every time I am going out so I will not pay fare”.

Confirming the development, the Lagos State Police Public Relations Officer, DSP Kenneth Nwosu, said the suspect was still in police custody and would soon be arraigned in court.