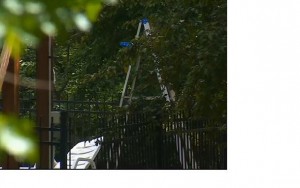 A young Minnesota man in his 20s impaled his thigh on a metal fence post after falling from a second-story hot tub, according to police. The incident occurred at about 11 p.m. Saturday in Golden Valley, Minn. The unidentified man was sitting on the edge of a hot tub on the upper level of a home when he fell to the lower level and landed on a wrought iron fence post, police say. UPI has more:

The post impaled his thigh, and a witness says the man used a ladder to support his weight until three responding officers held him up as firefighters cut off a corresponding portion of fence. Sgt. Dave Born of the Golden Valley Police Department told WCCO this occurred “while the victim was in a lot of pain, and bleeding.”

Born said the man was lucky the post did not impale his groin area or femoral artery, which is located in the upper thigh. Emergency crews took the man to North Memorial Medical Center with non-life threatening injuries. Police say alcohol was a factor in the incident.

In February of last year, a 10-year-old boy in Rio de Janeiro, Brazil, survived after falling from a guava tree onto a metal fence post that pierced his left side and exited behind his right ear.

The previous year, another 10-year-old boy, this one from Winter Park, Fla., survived an 18-foot fall from a mango tree onto a fence with metal spikes that punctured his torso and cut his face.