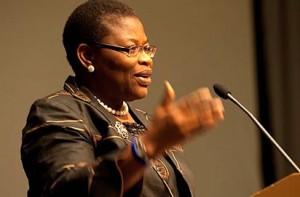 Former Minister of Education, Dr. Oby Ezekwesili has called for an overhaul of the Nigerian civil service, noting that only those with character, capacity and competence will be able to work with the vision to reform the country.

Ezekwesili said this at this year’s Lagos Public Service Day with the theme The role of public service in women empowerment, innovation and accessible service delivery.

She lamented that the civil servants in the country had abandoned merit and result oriented strategies. “Public servants have ignored the activities required to achieve result and focused on the smallest aspect of governance. It is the transactional mind of the country’s civil service that made the place unattractive to the brightest brains in the country. Rather it became an environment where people who are unconcerned about transaction are.

“So if we want to compete with other great nations, we must solve our problem with the best civil servants we can find. Every public service in any nation will do well on the bases of the competence, capacity and character of the people (civil servants) that are assembled to solve the problem.”

The former minister noted that if the country cannot achieve high standards in its civil service, it would affect the present administration’s pursuit. “If the public service had gone back to what it was originally intended to be, more than 100 million Nigerians will not be poor at the moment. For instance, China has been able to lift about 600, 000 people out of poverty because they had a better civil service.

“The vision of the political leader requires an organised system of execution that is powered by the civil servants in order to achieve result. So the public service is that level of governance powered by the technical experts assured with security premium that is consistent with the longevity of nation building.

“If the country will make it, it would depend on the quality of human beings that will dislodge the mentality of transactional civil service that was put upon us by the virtue our addiction to oil as the basis for economic development,” Ezekwesili, said.

More than 500 civil servants who have served in the state public service for over 30 years were honoured at the event.