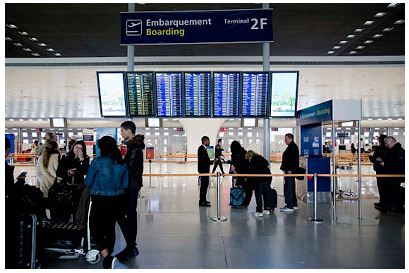 Paris airport police held a 6-year-old French girl for three days on suspicion she had a fake passport until a judge ordered her released into her mother’s arms, a lawyer said.
Authorities insist that police were just doing their jobs to protect children from trafficking, but the case has caused indignation in France amid sensitive debate over police treatment of waves of undocumented migrants coming to Europe in recent months.The girl was detained Saturday at Charles de Gaulle airport, after arriving from Cameroon, said lawyer Sidonie Leoue. The girl was traveling as an unaccompanied minor carrying all necessary documents, and her mother was waiting at the Paris airport to greet her, Leoue said.
Police thought the girl’s passport photo didn’t resemble her, and suspected a fake, according to the lawyer and the French Interior Ministry.The Paris-born girl was held in a special police day care for three days before she appeared before a judge, who asked the girl to identify her mother, seated across the courtroom, the lawyer said. The girl also was shown photos of a teacher and classmates from a school she had attended in France, and was asked to identify them, which she did.“The judge said it was all a mistake” and ordered the girl’s release, Leoue said. “It’s inadmissible that minors are held there like this, especially for a reason such as this.”

“Verifying the identity of a child, establishing with certainty the link between the (child) and the person traveling with them or waiting for them at the airport, is about protecting the child against trafficking, kidnapping,” he said. He said minors are held in a special nursery at the airport run by Red Cross staff “to make their stay as calm as possible.”
However, amid anger over the girl’s case, he said the ministry issued guidance Friday urging border police to handle such cases very quickly to avoid delays.

Pierre Henry, head of migrants’ rights group France Terre d’Asile, said the case and another reported in French media Friday about a 3-year-old girl from Ivory Coast who was also detained at the airport, were “abhorrent” and reflected the “state of thinking” and suspicion surrounding migrants.

“It is an incident that should be condemned, and should lead to reflection,” said Henry. He warned against generalities, however, and acknowledged that airport police have made marked improvements in the handling of underage illegal migrants in recent years.
The girl was not identified because she is a minor. Her mother, speaking on Europe-1 radio, said her daughter “cried a lot” after the incident.

“She doesn’t stop talking about it,” said the mother, who was identified only by her first name Isabelle to protect her daughter’s identity.

“She asks each time ‘but why are they talking about me? Why did they do this to me?’”