Home Politics Grant Me The Privilege Of Nominating A Minister From Ekiti For Your...
Facebook
Twitter
WhatsApp 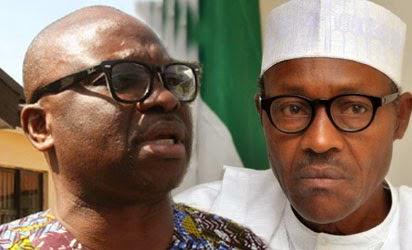 Governor Ayo Fayose of Ekiti State has asked President Muhammadu Buhari to grant him the privilege to nominate a ministerial candidate to fill the slot of the state in the Federal Executive Council.

The governor, who made the request in a letter to the President dated May 31, 2015, said if the request was granted, he would nominate a worthy and competent Ekiti professional for appointment in the federal executive council.

“Should the request be favourably disposed to, I shall be happy to nominate a worthy and competent professional who can always oblige your Excellency and your cabinet the benefit of a second opinion in the serious business of governance”, he said.

Fayose pointed out that his letter was written based on the declaration made by President Buhari that he would put the overall interest of the country above political partisanship and biases.

The governor also noted that his letter was on the strength of the 1999 constitution of the Federal Republic of Nigeria section 147 sub (2) and (3) which states that, “Any appointment to the office of the Minister of the government of the Federation shall if the nomination of any such person to such office is confirmed by the Senate, be made by the President.

Fayose further argued that since Ekiti is a Peoples Democratic Party state where the state governor, the National Assembly and the state assembly members are PDP, it was expedient that he be accorded the honour of naming the minister that would come from the state.

He noted that this would not be new because the late Chief Bola Ige, who was the leader of the Alliance for Democracy and the party’s National Chairman, Ahmed Abdukadri, were appointed minister and special adviser respectively by the PDP government of Olusegun Obasanjo between 1999 and 2007.

In a swift reaction to Fayose’s letter, the Ekiti APC Publicity Secretary, Mr. Taiwo Olatubosun, described the requests therein as “a gratuitous insult and madness at its worst fits”.

The party said: “Even if he were to be APC governor, haven’t President Muhammadu Buhari made it plain that he won’t allow the governors to pick ministers for him?

“Why didn’t Fayose fight for ‎Governor Kayode Fayemi to allow him suggest Ekiti ministerial nominees for President Goodluck Jonathan when the former President was appointing his ministers?

“We hope Fayose will, for once, strike a sane chord in his public conduct and stop hallucinating about the right to nominate candidates for Ekiti ministerial slot”, APC stated.