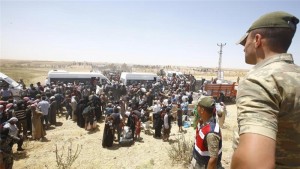 Hundreds of people have fled from Syria into Turkey as moderate fighters and Kurdish forces battle the Islamic State of Iraq and the Levant (ISIL) group holding the Syrian border town of Tel Abyad. Aljazeera was there:

Activists on the Turkish border said that Turkish authorities allowed Syrian refugees in Raqqa province to cross into Turkey on Wednesday after another group of hundreds crossed over to Turkey on June 4.

Since last week, thousands of civilians from northern Raqqa countryside have fled their homes and gathered on the Turkish border because of the ongoing clashes in the area.

Most of refugees sleep in deserted houses or public utility in the Turkish border town of Akcakale in Sanliurfa province because Syrian refugees camps in Turkey cannot accommodate more refugees, according to activists.