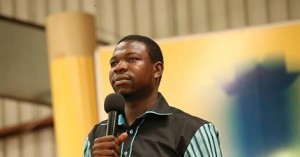 However, when Kanyama did not come out of his grave, the soil was removed and he was found dead. Five members of the family were arrested and charged with murder. High Court Justice Owen Tagu heard that on the day in question, the five men asked their priest, Zvidzai Muchengeti, for help to cleanse their home of evil spirits, which caused mysterious deaths in their family.

Kanyama was invited to the home to conduct the cleansing ceremony. Kanyama allegedly told the family that the cleaning process entails him being buried alive so that he can summon more powers to ward off evil spirits.
Father Zvidzai told the court that Kanyama, helped dig the grave and then prayed before jumping inside. While laying face down, he ordered the family members to cover him with soil.

Joseph Taderera told Justice Tagu that as the men were in the process of filling the pit, he asked the five men to stop, but Kanyama urged them to continue. “I warned the men about the danger of their actions, but my advice fell on deaf ears because Kanyama shouted, telling me that I am disturbing his angels, and urged them to continue filling the grave, saying that he would later come out alive,” Taderera said.