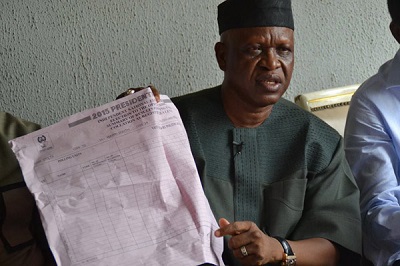 The candidate of the All Progressives Congress in the April 11 governorship election in Delta State, Chief O’tega Emerhor, has accused the Independent National Electoral Commission, INEC, of transferring unnecessary burdens to election petitions tribunals by not upholding the sanctity of card readers during the 2015 general elections.

Emerhor, who applauded the courage and integrity of the INEC chairman, Prof. Attahiru Jega, for standing by electoral guidelines for the conduct of the elections, especially the use of card reader, however, accused him of “shirking from INEC’s responsibility” and “now passing such responsibility to the ongoing tribunals”.

Emerhor’s position was contained in a statement issued on Saturday.

The APC governorship candidate said, “In the first place, INEC ought not to declare results that did not emanate from the card readers and or use such results to declare winners.

“If INEC set out to use card readers to conduct elections, it ought to put in  place a mechanism to ensure that the results declared are those emanating from the use of card readers and not those that were manually manipulated.

“It is a regrettable dereliction of duty for INEC and its staff to, in the first instance, either connive with or turn a blind eye to illegality and then go ahead to announce and declare winners based on manually generated results in place of card reader results”.

This situation, he added, “Thereby empowering elections riggers and punishing law abiding candidates with the burden of proof at the tribunals in their quest to annul illegally acquired mandate, a situation that was avoidable ab initio”.

Emerhor believed that INEC still have an opportunity to “go beyond just reconfirming its guidelines as Prof Jega has just  done, to standing up to provide all necessary support materials, readiness to testifying at the tribunals and taking legal stand against undeservingly declared winners at the ongoing cases at the tribunals”.

The APC flag bearer, therefore, called on Jega and INEC to discharge “their erstwhile responsibilities and duties through their legal representatives, who are now defending INEC’s role at the various tribunals, by supporting aggrieved candidates against all such undeservingly declared winners”.