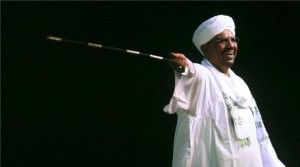 A South African court has granted an interim order to prevent Sudanese President, Omar al-Bashir  from leaving South Africa, where he is attending an African Union summit, until it hears an application calling for his arrest. The International Criminal Court (ICC) issued an arrest warrant in 2009, accusing Bashir of war crimes and crimes against humanity related to the conflict in Darfur. He denies the charges. Aljazeera reports:

An application reportedly lodged by a human rights group was set to be heard in the Pretoria High Court at 3pm local time on Sunday to decide whether Bashir should be arrested. The judge said the court will decide whether a South African government cabinet decision to host Bashir would trump the ICC arrest warrant.

Bashir boarded a flight on Saturday to Johannesburg to head Sudan’s delegation at the summit which starts on Sunday, presidential sources and the state Sudan News Agency said.

The South African Broadcasting Corporation reported that Bashir was later “welcomed by South African officials and Sudanese diplomats on his arrival in the country”. South Africa is a member of the ICC, which does not have its own police force and relies on member states to detain suspects.

Since the arrest warrant was issued, most of Bashir’s trips abroad have been to non-ICC states such as Saudi Arabia and Egypt. But he has also been to member states that have declined to arrest him, such as Nigeria, which hosted him in July 2013.