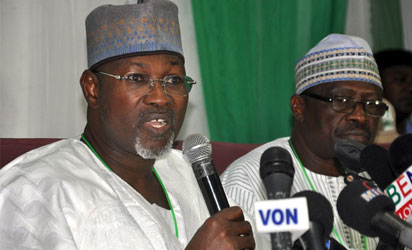 The Chairman of the Independent National Electoral Commission (INEC), Prof. Attahiru Jega, has called on the National Assembly to be decisive in reforming the Electoral Act and reviewing the Constitution.

Mr. Jega made the call at a Dinner organised for him by the Nigeria Labour Congress, NLC, the Trade Union Congress and some Civil Society Organisations in Abuja on Friday night.

“Electoral reform has just begun, a lot more efforts need to be done,” he said. “The Justice Muhammed Uwais panel has a lot of good recommendations, which are yet to be taken on board and implemented”.

The electoral chief added that “between now and 2019, there is sufficient time and scope for us to be able to ensure that additional reform methods can come in”.

He said INEC under his leadership “made a recommendation two years ago for amendment to the electoral act and the constitution to improve the legal framework before 2015 general elections.

“Regrettably, it did not materialise up to the time we did the elections, and the existing legal framework is fairly good.

“It could have been better if the legal framework had been improved”.

Mr. Jega called on the National Assembly to continue to support INEC and give it the necessary encouragement required to improve on the good foundation that had been laid out. He pledged support to future electoral reforms and improvement in the electoral process in the country.

He commended INEC commissioners and staff for their support and efforts under very difficult circumstances for successful elections in 2015. He also commended the labour movement for their continuous support to INEC and the reforms in the electoral process.

The NLC President, Ayuba Wabba, said the reforms, which the INEC boss brought to bear on the organisation reflected in the 2015 general elections.

“With commitment, patriotic and honest disposition, Jega was able to, through administrative wizardly, accomplish the historic success of 2015 general elections.

“That was how Jega was able to outwit our chronic election riggers out of relevance in the innovations of the permanent voter cards and card readers”, he said.

Mr. Wabba advised that whoever would be the next INEC boss should continue with the benchmark set by Jega. He said Nigerians would not accept a reversal of the progress made with the 2015 general elections where the will of the people was truly reflected in the ballot.

Mr. Wabba called for the full implementation of Uwais report, adding that it will go a long way to achieve full credibility in the conduct of elections.

Salisu Mohammed, Chairman, Labour Party Caretaker Committee, said it was time for Nigerians to build institutions that would have enduring legacies.

“What happened in the National Assembly is a cause for concern for all who have concern for Nigeria’s future.

“It shows that our democracy is still in infancy and if care is not taken, we may suffer serious setback”, he said.

Mr. Jega, who conducted Nigeria’s general elections in 2011 and 2015, is set to retire as the Chairman of INEC on Tuesday.