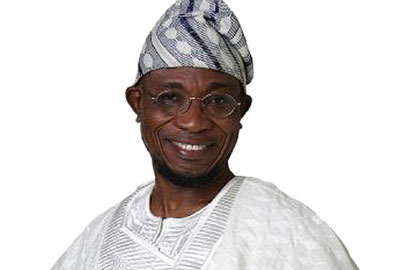 The Peoples Democratic Party in Osun State has described as lies, the claim that the helicopter bought by Governor Rauf Aregbesola’s administration is on lease and generating revenue for the state.

Chairman of the All Progressives Congress in Osun, Mr. Gboyega Famodun, had while reacting to the call by the PDP for the governor to sell the helicopter in order to use the proceeds to settle workers in the state, who have not being paid salaries for over seven months, said the aircraft was bought for surveillance purpose and now being leased out to generate revenue for the state.

But the State PDP Director of Media and Strategy, Mr. Diran Odeyemi, said the claim was a lie, insisting that the helicopter was being used solely by Mr. Aregbesola and members of his family.

The PDP said, “The contradiction that the helicopter supposedly bought for surveillance is also on a business lease in Lagos in itself is a lie. The machine is being used solely by Aregbesola’s family.

“APC should bury its head in shame by claiming to have built an airport in Osun when it is a known fact that the party achievements are mere propaganda”.

The opposition party also said that the state government had not completed any project since Aregbesola assumed office while challenging the ruling APC to mention any project it had inaugurated.

While describing the non-payment of workers’ salaries for the past eight months as the height of insensitivity, the PDP said the statement credited to Famodun that civil servants made up just one per cent of the state population was callous.

The PDP added, “We wonder why APC could not admit and state the actual Osun indebtedness which Semiu Okanlawon said was N44billion  in a statement but which Aregbesola admitted was N104b at Osun Assembly inauguration and criminally avoided to add up the N300 billion loans contracted by 30 local government areas on his instruction.

“APC should explain what has happened to billions of security votes the Governor had collected, how much is spent weekly on helicopter; Government House and Lagos visitors and other extravagant life of Aregbesola who was throwing recharge cards and US dollars at Lagos campaigns”.