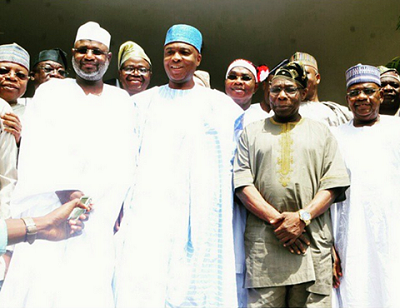 The Hilltop mansion of former President Olusegun Obasanjo in Abeokuta, Ogun State is currently a beehive of activities following the visit of Senate President Bukola Saraki.

According to PUNCH, the Senate President, whose election over a week ago is still generating ripples in his party, the All Progressives Congress, APC, is presently holding a closed-door meeting with former president.

They reportedly arrived Obasanjo’s Oke-Mosan Hilltop Mansion at about 9.10am in about seven Sports Utility Vehicles and immediately they alighted, proceeded to the inner chamber of the former president’s home.

It is yet unclear the reason for their visit to Mr. Obasanjo.