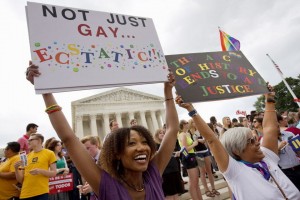 The US Supreme Court has declared that same-sex couples have a right to marry anywhere in the country, in a culmination of two decades of litigation over marriage, and gay rights generally. “No union is more profound than marriage,” wrote Justice Anthony Kennedy, joined by the court’s four more liberal justices on Friday. Al Jazeera reports:

Gay and lesbian couples already could marry in 36 states and the District of Columbia. The court’s 5-4 ruling means the remaining 14 states, in the South and Midwest, will have to stop enforcing their bans on same-sex marriage.

President Barack Obama welcomed the decision on Twitter, calling it “a big step in our march toward equality”. Hundreds of activists gathered outside the Supreme Court building to celebrate the decision, chanting, “Love has won.” The crowd also raised a large flag with the pink equal sign that has come to symbolise the gay marriage movement. Some wept.

Across the South and Midwest, gay couples rushed to marry at county clerk’s offices and judge’s chambers. “If you are among the many Americans – of whatever sexual orientation – who favour expanding same-sex marriage, by all means celebrate today’s decision,” Roberts said. “But do not celebrate the Constitution. It had nothing to do with it.”