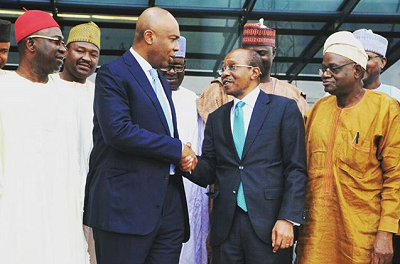 Governor of the Central Bank of Ni‎geria, Mr. Godwin Emefiele, on Wednesday revealed that the country’s foreign reserve rose from $29 billion to $31.89 billion in one month under President Muhammud Buhari.

As of the time former President Goodluck Jonathan left office, the reserves stood at $29 billion.

Emefiele, who stated this when he paid a courtesy visit on the President of the Senate, Dr. Bukola Saraki, also frowned at the way and manner officials of the past administration granted import waivers to their cronies and friends on various products such as rice and sugar.

The CBN boss, therefore, pleaded with the 8th Senate to go the extra mile to ensure that all revenue losses as a result of arbitrary waivers and concessions are fully recovered.

He said: “Following the drop in crude prices as high as 45 per cent and the fact that we had to depreciate our currency from N155 to N197, we also had to take certain decisions to ensure that we keep our reserve still looking good.

“I commend the President, Muhammadu Buhari, for his dogged approach that all leakages will be blocked.

“With those singular efforts and strong determination, we have seen our foreign reserves moving from $29 billion when His Excellency took office on the 29th of May to $31.89 billion”.

On what was discussed behind closed doors with the senate president and other principal senate officers, Emefile told said: “We briefed the Senate extensively on all the actions we have taken and other things that we are going to do to continue to strengthen the Nigerian economy, make it possible for our people to create jobs for our people.

“And we are saying if we cannot employ people, what action are we going to take to ensure those who have entrepreneurial skills create jobs for themselves and for other people?

“I am delighted to mention to you that the Senate, after almost about three hours’ deliberation, has graciously endorsed our actions today for everything that we have done.

“But I want to assure Nigerians that whatever action we have taken is done in the interest of our country.

“And I say that our reserve is our commonwealth and we have a right to protect our foreign reserve.

“We are going to continue to avoid situation where speculators and round trippers come into the country and think of how they can take advantage of what is happening as a result in the drop in food prices to plunder our reserves”.