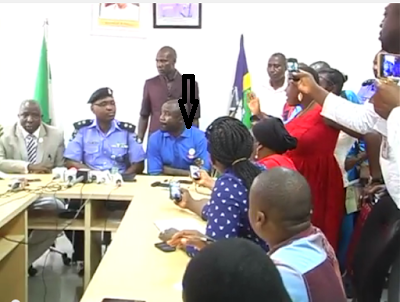 Martins Ugwu, who used his friend’s medical credentials to secure employment in the Federal Ministry of Health’s headquarters in Abuja, is to refund nine years salaries he drew while impersonating his friend.

The federal health ministry is “computing all salaries and allowances which accrued to Ugwu during his mischievous sojourn in the ministry for full retrieval by law enforcement agencies”, the Permanent Secretary in the Ministry, Linus Awute said.

Ugwu had reportedly stole the identity and credentials of his childhood friend, Dr George Davidson Daniel, the name under which he worked since 2006 at FMOH, police confirmed on Tuesday.

The original owner of the credentials, who is undergoing residency training in Jos, Plateau State, was at the briefing where his friend was paraded.

“My coming here is to show I exist in reality, and to prove that I have nothing to hide”, said Daniel.

“All these events have been traumatizing. I never thought a day would come when my identity would be exposed like this. I am a very reserved person”, he added.