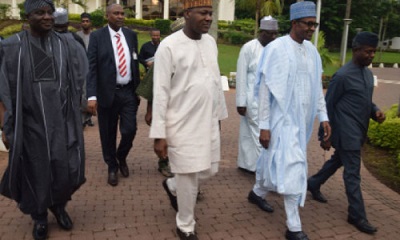 The crisis rocking the House of Representatives over zoning of key leadership positions among the All Progressives Congress members may be far from over if the conflicting positions adopted by the two warring factions are anything to go by.
The faction believed to be loyal to Femi Gbajabiamila said at the end of the meeting in the early hours of Tuesday with the party chairman, Chief John Odigie-Oyegun and some members of the National Working Committee, NWC, members resolved to adopt the APC leadership’s directive on sharing of the principal offices.
The party had in a June 23 letter to Speaker Yakubu Dogara zoned the key leadership positions as follows: Femi Gbajabiamila (South-West) as the House leader; Alhassan Ado Doguwa (North-West) as deputy leader; Mohammed Monguno (North-East) as chief whip; and Pally Iriase (South South) as deputy chief whip.
The letter from the APC leadership was in response to the lingering crisis that has rocked the 8th House of Representatives since its inauguration June 9.
Dogara, whose emergence as Speaker was contrary to the party’s directive, had rejected the nominations, citing the need to adhere to Federal Character principle and suggested other candidates for the offices.
However, Alhassan Ado Doguwa, who was formerly of the Gbajabiamila faction but switched allegiance as soon as the Dogara faction offered him the House leader position, said there was no time it was agreed by both sides that the party’s position be adopted.
“That is not true at all. At no point in time was such decision reached throughout our engagements yesterday, and till now, factions in the House of Reps crisis stood their grounds”, he said.
Similarly, a source close to Dogara said rather, the party accepted to adopt the speaker’s candidates for the principal officers’ positions.
The source said Doguwa was adopted for House leader, Pally Iriase for chief whip, Umar Buba Jibrin as deputy House leader and Chike Okafor as deputy chief whip.
The Gbajabiamila faction, meanwhile, warned that any contrary decision on the floor of the House, different from what was agreed at the meeting, will be “strange” and considered an “affront against our collective interest including that of the President”.