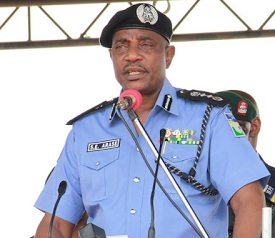 Ahead of the November 21, 2015 governorship election for Kogi State, the Inspector-General of Police, Solomon Arase, has assured people of the state of a level playing field during the polls.
Arase, who was at the Police Headquarters in Lokoja, was received by the State Commissioner of Police, Mr Samuel Ogunjemilusi and some other top police officers.
The IG was on a mission elsewhere but stopped by at the police command headquarters in the state to encourage the Police officers and also assure them of the Force Headquarters’ support at all time.
The IG also used the opportunity to pay a courtesy visit to the Governor of Kogi State, Capt. Idris Wada (retd.), during which he gave assurance that more manpower would be deployed in the state to tackle the internal security challenges.
Mr. Arase also urged the people in the state to cooperate with the Police by giving credible information which would lead to the arrest of criminals in the state.