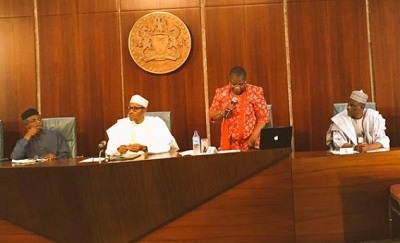 President Muhammadu Buhari on Wednesday decried the conflicting reports that emerged from the government and the Security Chiefs in the days following the abduction of over 200 schoolgirls from Chibok, Borno State in April 2014.

According to him, the discordant tunes portrayed former President Goodluck Jonathan in bad light both locally and internationally.

Buhari spoke while granting audience to members of the BringBackOurGirls advocacy group.

The President pointed out that government’s response to the incident was far from being impressive and unfortunate, saying “We cannot rationalise the government’s incompetence in handling this issue”.

Buhari used the opportunity to reiterate his administration’s commitment to mobilise and deal with the scourge of terrorism across the country.

He also insisted that members of the Boko Haram sect could not claim to be propagating Islam, saying they should think of changing their name to something else.

The president also declared that it was a matter of right for the government to take care of the welfare of the escaped Chibok girls and the parents, whose girls were abducted.

He said: “I think the government should provide the welfare as a matter of right”.

Promising to strengthen institutions, the president said that everything will be done to restore the lost glory of the Nigerian Armed Forces.

Previous attempts by the #Bring Back Our Girls (BBOG) group to have audience with the President were unsuccessful in the past as their daily sit-outs and press releases were detested by the immediate past Jonathan administration.

However, all that changed with the Buhari administration as they were allowed into the Presidential Villa today to make formal demands for the girls’ rescue, among others.

The group was led by the Coordinators, former Minister of Education, Oby Ezekwesili and Mariam Uwais, wife of former CJN, Justice Lawal Uwais.

Vice President Yemi Osinbajo along with the National Security Adviser, Col. Sambo Dasuki (retd.) and some Service Chiefs were also among top government officials that received the group in the briefing room attached to the Council Chamber.

Some of the demands made by Ezekwesili and Chibok Area Development Association, represented by Mr. Dauda Iliya on Wednesday, included increasing effort by the government to immediately rescue the abducted girls, for the Federal Government to start taking care of the welfare of parents of the abducted and escaped girls.

They also demanded for the general welfare of the entire Chibok community, including relief materials for all the displaced persons to be taken care of by the Federal Government.