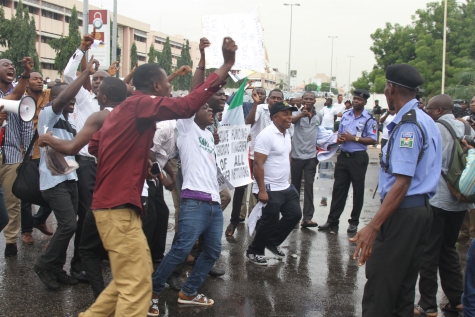 Over a hundred Kaduna State Traffic and Environmental Law Enforcement Agents on Thursday protested their sack by the Governor Nasiru El-Rufai.

The sacked staff were only recently employed by the agency and were undergoing training prior to their disengagement. They were in their fourth month of training in a school supervised by the state Ministry of Works and Transport.

The trainees, who stormed the Kaduna secretariat of Nigeria Union of Journalists, protested with placards that read: Bring Back Our Jobs, We Have Families That Depend On Us, Please, We Want Kaduna State Government To Return Our Jobs etc.

The KSTELEA was established by the previous administration of Ramalan Yero.

Speaking on behalf of the 177 trainees, Ahmad Abdullahi said they were issued sack letters a few weeks ago.

“We were thrown into confusion because we never expected it”, he said. “We never expected to be told that our services are no longer needed by the state government after giving us hope for five months.

“Some of us were artisans before we were given this job by the former governor. We were paid N18,000 minimum wage as salary. Now, the new governor says he does not want us since we were brought in by a PDP governor. This decision was not in the interest of the masses”.

The disengaged trainees appealed to Mr. El-Rufai to kindly reconsider the decision and give them back their jobs to enable them take care of their families.

Another trainee, Ibrahim Musa, said majority of them were diploma holders and graduates while some were SSCE holders.

“We have families depending on the stipend given to us since we started training, five months ago”, he said. “We were all happy that by the end of our six months training we will be confirmed as permanent staff before they terminated our appointments. We were disturbed with the letter of disengagement from the job”.

He said: “On assumption of office, the government found out that the agency had conducted irregular recruitment contrary to due process and the law establishing the agency.

“Early in June, the then general manager of the agency sought approval to send the improperly recruited staff for training at the police college. This request was declined in favour of reorganizing the agency and conducting fresh recruitment in a manner that is fair and accords due process. The government cannot condone and abide illegal recruitment, even if the beneficiaries have been paid stipends for months.

“Those persons who were recruited in an irregular manner are free to reapply when the government opens the recruitment window”.