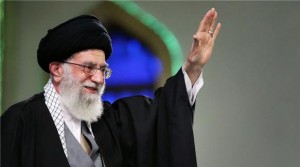 Iran’s Supreme Leader Ayatollah Ali Khamenei has vowed that his country’s sharp opposition to the US government’s policies in the Middle East will not change despite acquiescing to a deal with world powers over his country’s controversial nuclear programme earlier in the week. Aljazeera reports:

Khamenei said on Saturday, in an address marking the end of the Muslim holy month of Ramadan, that he wanted Iranian officials to peruse Tuesday’s landmark agreement to ensure national interests were preserved and to prevent the disruption of its political principles or military policies.

“We will never stop supporting our friends in the region and the people of Palestine, Yemen, Syria, Iraq, Bahrain and Lebanon. Even after this deal our policy towards the arrogant US will not change,” he said.

Under the deal, sanctions will be gradually removed in return for Iran accepting long-term curbs on a nuclear programme that the West has suspected was aimed at creating a nuclear bomb. Iran denies it seeks a nuclear bomb.