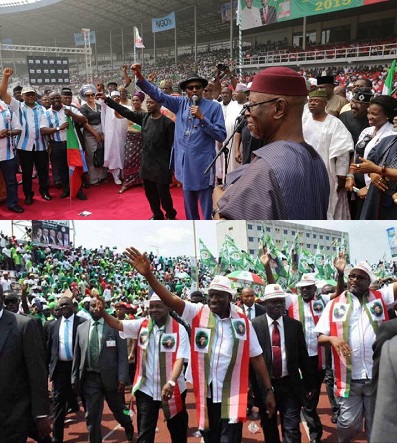 The 2015 general elections will probably go down as the most expensive in Nigerian history if reports that the Peoples Democratic Party (PDP) and All Progressives Party (APC) spent a combined sum of N3.23 billion on political campaign advertisements.
The report, which was published weekend by Compliance and Content Monitoring Ltd (CCM), put the PDP’s spending about N2.5 billion (77 per cent) and that of the APC at N728 million (23 per cent).
According to the report, the media advertisements were placed on radio, television, press and billboards for the PDP and the APC presidential campaigns between December 2014 and March.
The report was unveiled after a thorough analysis of over 260 broadcast media (radio and television), 48 print (newspapers and magazines) media and over 1,000 outdoor billboards across the country.
The firm focused on the two main political parties, taking into cognisance the nation’s geographical zones, the advertising campaigns of the different political parties, individuals and groups in support of the presidential candidates.
Speaking at the unveiling of the report, Managing Director of CCM Limited, Mr. Tunde Onadele, said about 253 creative materials were deployed across radio and television channels in all the 260+ stations monitored by CCM, with PDP utilising 145 materials while APC deployed 107 materials.
The split across media platforms showed that the two parties utilised mostly television and press platforms for over 85 per cent of total campaign spending.
The report highlighted that gross media rates were used in CCM’s calculations and the data across the monitored stations account for about 85 per cent of the national coverage.