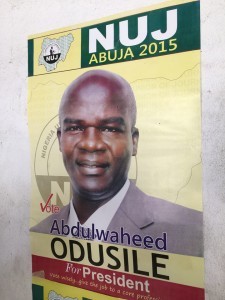 Senate President, Bukola Saraki has congratulated the newly elected President of the Nigeria Union of Journalists (NUJ), Alh. Waheed Odusile over his victory. He urged him to take the task of eliminating quacks and fake journalists seriously as they are the ones who give the profession a bad name.

“The new executives under Odusile should take the issue of enforcement of compliance with professional ethics as a priority,” a statement signed by Sanni Onogu Chief Press Secretary to the Senate President said.

According to the statement, “Journalists of today should be ready to abide by the code of ethics of the profession and they should be more professional because their role in sustaining democracy and on-going development in the country cannot be emphasised.

“No doubt that you have what it takes to lead a critical body like the NUJ at this juncture in our democratic journey. I am particularly pleased that your election was based on your popularity and wide acceptance by your colleagues from all over the country,” he said.

Saraki urged Odusile to use his new position to better the lots of both journalists in the country and the journalism profession because the contribution of the media will go a long way to boost the efforts of the present administration to revamp the nation’s economy.

The Senate President said he looked forward to a robust partnership with the media and their elected representatives in the task of making legislations that will lead to improved standard of living in the country.