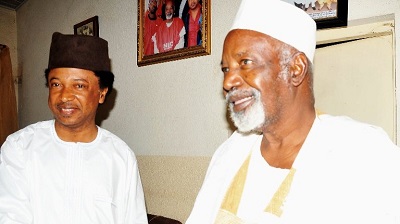 The Senator representing Kaduna Central Senatorial District, Comrade Shehu Sani, on Sunday said the case of alleged forgery of the 2015 Senate rules by some senators shouldn’t have been made a police case.
The senator made his position known on the matter when he paid a courtesy call on the first civilian governor of Kaduna State, Balarabe Musa, at his Malali residence.
“The forgery problem is not the issue of police but the issue of the senate”, he said. “I got elected on the 8th senate. I was provided with document that I used; whether that document was forged, I cannot affirm”.
The human rights activist decried a situation where APC Senators, even after winning the last election, are still divided among themselves because of the lingering crisis in the National Assembly.
“We should bury our differences and work together”, he pleaded. “Though some senators still have their differences, but I am not one of them; and not one of those who went and elected the new leadership of the Senate”.
Mr. Sani added that “the crisis rocking NASS is not in the best interest of the parliament, government and whole country.
“I belong to those who believe that, we should bury our differences so that the country can move forward and continue with our legislative duties and commit ourselves to those who elected us as senators”.
The senator described Balarabe Musa as a man who did not make so much noise about corruption, but led an exemplary life with the meagre resources under his control during his tenure as governor.
“For sure, you (Balarabe Musa) cannot be disputed as the best governor Kaduna State has ever had”, he said.
In his response, the elder statesman said he and Mr. Sani had been involved in struggles for the socialist reconstruction of Nigeria to ensure peace, economic prosperity, equality, justice and the dignity of the human person and the development of the entire country.
“This is the struggle and it was initiated by our predecessors. And we are very pleased that the result of our struggle has produced people like Senator Shehu Sani”, he said.
“I have been associating with him for almost 35 years now, right from when he left Kaduna Polytechnic. Although now we happen to be in different political parties for different reasons”, Mr. Musa noted.