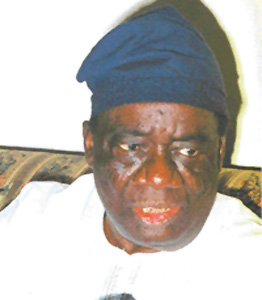 A former Attorney-General and Minister of Justice in the defunct Second Republic, Chief Richard Akinjide (SAN), has faulted the Nigeria Police for wading into the ongoing Senate leadership crisis on the strength of a petition that the 2015 Senate Standing Order was forged.
The former Justice Minister argued that the police lacked the power to meddle in the Senate’s internal affairs.
Following reports in a section of the media that the police investigation affirmed the claim by the petitioners that the Standing Order, which was used for the June 9 election of Dr. Bukola Saraki as the President of the Eighth Senate, was a forgery, some Nigerians had called for the prosecution of the Clerk to the National Assembly, Salisu Maikasuwa, senators and any other person found culpable in the illegal amendment to the Senate rules.
However, Mr. Akinjide expressed doubts if any lawmaker can be prosecuted on the basis of the said police report.
He said: “It would have been better to first see the police report and rules which governs the Senate. But don’t forget, the National Assembly is sovereign. You cannot mix National Assembly rules with party rules. They are two different things. I was in parliament for two terms and I know that party rules are different from parliament rules.
“If they break the rules of the National Assembly, they have not committed any offence. Two, this is not a matter for the police. The National Assembly is sovereign, so it is not a matter the police should be investigating.
“It will be absurd in the House of Commons in London or parliament in America for the police to investigate what they did well or didn’t do well. With the greatest respect to the police, I think they are wrong in what they’re doing”.