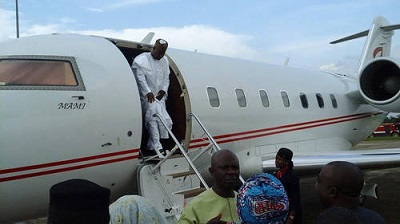 Speaker of the House of Representatives, Hon. Yakubu Dogara, has denied owning a private jet or hiring one with public funds.

He was reacting to a report by SaharaReporters that he travelled in a private jet to Asaba, Delta State, to commission an “altar in a Church in Ubulu-Uku, a town in Aniocha local government area”.

While confirming he made the trip on a private jet, Mr. Dogara denied being the owner of the jet or funding the trip with public money.

The Speaker, who admitted that a smaller 8-seater plane was later allocated to him, said he turned it down due to the size of his entourage.

In a statement Tuesday, Mr. Dogara reacted to the news report by denying he was the owner of the private jet.

The statement, signed by his media aide, Turaki Hassan, read, “Attention of the office of the Rt. Hon. Speaker Yakubu Dogara has been drawn to a story published by online news portal Sahara Reporters about a private visit to Delta State embarked upon by the Speaker.

“We wish to state for the records that Hon. Speaker was invited to Delta State by Evang. Hon. Mrs. J.O. Mrakpor representing Aniocha/Oshimili Federal Constituency of Delta State to help commission a church she built”.

The statement continued, “Evang. Mrakpor has in the past built three churches and she just finished building the fourth one in her community in fulfilment of the promise she made to God before the 2015 elections that she will build a church for the community if God gives her victory.

“Being a private visit, Mr. Speaker in company of some of his colleagues including Muslim members of the House, attended the church service where the new church and not just an ‘altar’ was commissioned and prayers were offered for the restoration of peace in Nigeria.

“For the record: Mr. Speaker does not own a private jet. Mr. Speaker personally paid for the cost of the trip to Delta State and did not take a single dime from official coffers, being a private visit”.

The statement urged “online and conventional media organisations” to always check their facts before going to press.