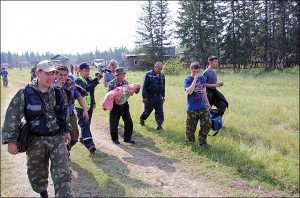 A woman who gave birth alone and was stranded for days in a remote area of northern California says she survived the ordeal by starting a fire that roared out of control and drew firefighters to her rescue. Officials with the Plumas National Forest confirmed that a fire broke out on Saturday (local time) at the park and that firefighters rescued a woman and a newborn baby from the burn area. ABC News has more:

They declined to discuss the cause of the fire, saying it was under investigation. Amber Pangborn of Oroville, California, told television station KCRA that after realising she might be going into labour, she drove along a back road to get to her parents’ home for help, only to get lost in a remote part of the forest. “There was no cell phone service, there was nothing. And the car was out of gas,” Ms Pangborn said.

Alone, Ms Pangborn gave birth early last Thursday. She and her newborn child, whom she named Marissa, were then stranded without any provisions except for three apples, a bottle of water and a can of soda. The 35-year-old said she also encountered a swarm of bees and mosquitoes. “I was trying to get them not to sting her, but I got stung,” Ms Pangborn said, referring to her daughter.  Desperate to get help, she started a fire two days later in the hope of attracting attention, and the flames quickly grew.

“The fire just went whoosh and shot up the mountainside. And I was looking at Marissa … and I was like, ‘I think mummy just started a forest fire’.” A helicopter crew responding to the fire spotted the car containing the mother and newborn and sent a fire truck which took the pair to another location. The fire grew to 1,000 square metres and was extinguished without any injury to firefighters, the Forest Service said.