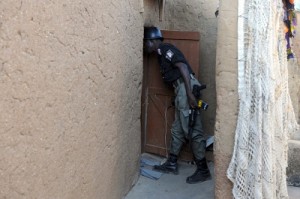 Human rights activist and lawyer, Mr. Oghenejabor Ikimi, has called on the Assistant Inspector General, AIG, of Police, Zone 5, Benin, Edo State, to order an independent and impartial inquest into an alleged extra-judicial killing of Mr. Ejovi Edaferiemu, a mechanic, by police in Delta State and the disappearance of his corpse. He also complained about the unlawful arrest and continuous detention of Mr. Abdullahi Shaibu, a commercial tricycle driver, since June 15. Vanguard reports:

Ikimi said police officers from “B” Division, Warri, on June 15, arrested Edaferiemu and Shaibu for allegedly abandoning a stolen vehicle near the former’s workshop in Warri and subjected them to inhuman treatment. He said his clients, Frank Okodu, Yakubu Shaibu and Yunusa Salifu, searched in vain for the suspects at “B” Division, Warri, and various police stations in the oil city and environs until June 25, when one of them located Shaibu at the State Criminal Investigation Department, SCID, Asaba.

He said: “One of our clients was granted access, on June 25, to see and speak with one of the suspects, who informed our said client that Mr. Ejovi Edaferiemu and himself were arrested at the same time by the men of “B” Division, Warri, “Shaibu revealed that that Edaferiemu was tortured to death in his presence on June 18, by men of the State Criminal Investigation Department, SCID, Asaba, after both of them were transferred to Asaba.

“It is our brief that the surviving suspect further informed our client that it was just by God’s grace he survived the various prolonged tortures, both at “B” Division, Warri, and at SCID, Asaba. “He said it was after the death of Edaferiemu that he was rushed to the hospital for treatment by the said policemen at Asaba, after he collapsed from the tortures meted out on him.”