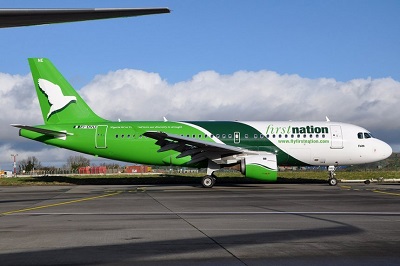 Tragedy was averted on Friday at the Murtala Muhammed Airport Terminal 2 in Lagos following a ground collision of two planes belonging to FirstNation Airways.
The News Agency of Nigeria reports that a similar incident had occurred at the airport on July 6, following the collision of two planes belonging to Emirates and Hak Air.
NAN gathered that Friday’s incident, which happened at about mid-day, involved two Airbuses 330 conveying about 250 passengers.
The two planes had their bodies partially damaged as a result of the collision.
A source at the airport told NAN that one of the planes was taxiing from the runway to MMA2 to disengage passengers, while the other aircraft was preparing to take off to Port-Harcourt Airport from the same terminal.
The source alleged that the pilot may have been misdirected by the marshals to taxi to the wrong part of the apron.
According to the source, the Port-Harcourt bound aircraft was parked at Gate 4 while the arriving aircraft was bound for the Gate 3 of the terminal.
However, the source claimed that the marshals misdirected the arriving aircraft to the same gate as the parked aircraft which led to their wings brushing each other.
Following the incident, the Nigerian Civil Aviation Authority immediately grounded both aircraft while passengers were asked to disembark by the airline.
NAN further gathered that the refunds of tickets were made to passengers on the Port-Harcourt bound aircraft by the airline.
The NCAA also confirmed the incident in a statement issued by its General Manager, Public Affairs, Mr. Fan Ndubuoke.
Ndubuoke said no passenger was hurt and that the incident had been referred to the Accident Investigation Bureau for further investigation.
He also reiterated NCAA’s commitment to safety and security of passengers.