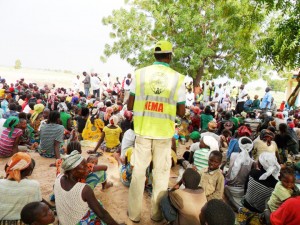 The United Nations (UN) has commenced the screening of 2,000 Internally Displaced Persons (IDPs) for the first phase of providing means of livelihood and early recovery support scheme to the victims of Boko Haram insurgency.

Speaking in Gombe, yesterday, the UN Resident Coordinator/UNDP Resident Representative, Dr. Daouda Toure, told the IDPs that the screening was to ascertain if they were actually victims of insurgency.

“UNDP, in partnership with the governments of Adamawa, Borno and Yobe, is undertaking to ameliorate the suffering of the displaced people in the three states as a result of Boko Haram insurgency,” Toure said.

“UNDP is embarking on the Livelihoods Support Scheme. Under the first phase, 500 victims will be selected in Adamawa, Borno and Yobe.

“These victims will be placed in a two-week compulsory orientation programme, where you are going to undergo physical exercise, training, capacity-building on mediation, conflict prevention, conflict transformation, social integration and peaceful co-existence for two weeks.

“And because it is an intensive programme, we are very mindful of those we select and we are doing this screening because we want people that genuinely need this assistance to be selected.

“Some of you started having hope, but unfortunately, their lives or their means of sustaining livelihood have been cut short, because of the Boko Haram insurgency.

“But let me assure you that for every one that is impacted in one way or the other, you will be accommodated in the various phases of the Early Recovery Programme. This is one of it.”

Toure, who was represented by Mr. Matthew Alao, UNDP’s Conflict Prevention and Peace Building Analyst, said the beneficiaries would be placed on a paid six-month or one-year skills acquisition programme.

He explained that the successful candidates would be supported with take-off grants and also equipped with the tools of the skills they acquire.

Toure cautioned the IDPs already shortlisted against lobbying, saying the scheme was not a government largesse, but a specific programme targeted at specific people who really needed help.