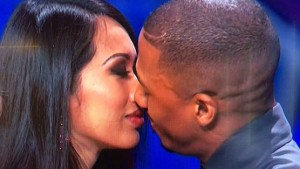 Nick Cannon is now single and hence, he’s totally allowed to kiss random people he has never met before.

Joanna Kennedy, a self-professed “passion and intimacy expert,” said her audition would consist of a kissing lesson and she needed a volunteer, Howard Stern didn’t hesitate to point out the show’s host.

“I know of someone who recently became single. And based on what I hear in his dressing room, I’m going to nominate our very own Nick Cannon,” said the judge.

Nick Cannon tried to resist, but after the crowd insisted and a a pretty volunteer was also picked out of the crowd, Nick agreed.

Nick threw off his jacket but wasn’t allowed to use his hands at first, and was instructed to “say hello with yours eyes” and “make her feel really comfortable.”

He was then told to put “one hand behind her heart” and caress her cheek.

After so many ‘boos’ and X buzzes from the rest of the judges, Cannon was given permission to seal the deal.

Find out below if he really kissed her: