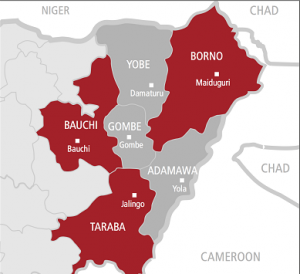 Former President Olusegun Obasanjo has identified the alleged refusal of governors in the Northeast geo-political zone to pay their counterpart funds to the Universal Basic Education (UBE) as one of the factors responsible for the spread of insurgency in the region.

Speaking in Benin at the eleventh convocation ceremony of Benson Idahosa University, Obasanjo noted that had the governors paid their funds, children in the zone would have had free and compulsory education rather than engaging in terrorism acts.

“Education is a moral enterprise which we need to re-engage  the issue of Boko Haram. President Buhari should also tackle it from the angle of morale education. If we are able to tackle Boko Haram with education in our schools, both in the social media that they use, we will dilute their messages and positively win their hearts and others who have been swayed by the terrorists.

“To succeed with counter messages, we need to be more appealing, and truthful and as intense as those of Boko Haram. The capacity of all teachers should be strengthened to deliver such messages. Morning and afternoon assemblies of our primary and secondary schools should have a strong dose of such messages. Our airwaves and social media should also be saturated with such positive messages. Even if we defeat Boko Haram, we need education to sustain the victory,” Obasanjo said.

“In 2010 there was a survey of education in Nigeria and among the six geo political zones. In the South-West, it was 79 per cent that are educated. In the South-East, it was about 78 per cent.   The North East, where Boko Haram operates, it was 19 percent and that is one of the reasons people believe that Boko Haram was a menace waiting to happen. It doesn’t matter what we do, we have to reverse that trend.

Maybe the situation has even gone worse in the last five years because people have moved out of school. Some schools have been destroyed and we cannot fold our arms and say it is up to the North East.

“It is up to all of us. In Nigeria, we have to do what should be done to bring parity in the area of education across the length and breadth of the country. The Boko Haram insurgency is a serious problem which we pray will be a thing of the past soon.  I am sure that President Buhari will do the needful to exterminate this scourge.

“That is one of the reasons President Buhari is travelling to the US next week to secure the support of the American government in fighting terrorism in Nigeria. As we tackle it from the military front and other angles, we should also tackle it through the power of education which is what you have asked me to talk about today,’’ the ex-president said.