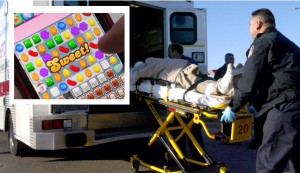 Angela Gardner, age 25, was shot several times by an acquaintance for allegedly sending too many candy crush invites. Angela, described as “always playing candy crush” is currently being treated in the emergency room in critical condition for several gunshot wounds all across her body. The gunman, 26 year old Kenneth Bailor is currently in custody and will face charges of attempted murder.

According to Scoop, “She played candy crush way too much” says Allison Fine, a close friend of Angela, “she was getting annoying, it’s not that surprising that someone shot her, believe it or not” finished Fine. It is reported guys Angela sent Kenneth and almost all her friends an average of 14 candy crush invites daily to all of her friends. Nurses reported that Angela, although, barely alive and well, asked for her iPhone so she can play “one more round of candy crush before I die”.

It is currently not known if Angela will survive the gunshot wounds, but it is obvious that she believes her life is over.