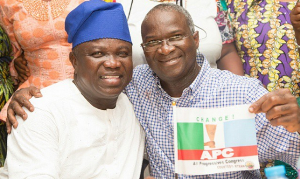 The Peoples Democratic Party in Lagos State has denied rumours making the rounds that it is behind the recent call for the probe of Governor Akinwunmi Ambode’s predecessor, Babatunde Fashola (SAN).

Nonetheless, the PDP urged Governor Ambode to probe the immediate past administration of Fashola.
The PDP, which denied having complicity in the alleged acrimony rocking the All Progressives Congress in Lagos, however, advised the APC leaders in the state to face the allegations instead of blackmailing or dragging the opposition party into its internal strife.

It also reiterated its commitment to providing vibrant opposition to the incumbent administration.

“As long as we notice any ‘misgovernance’, we will blow the whistle. We shall not relent in doing this constructive opposition. It does not matter whether it coincides with efforts of other groups or interests in the state. We shall commend when appropriate and condemn when inevitable in good faith for good governance and expected growth of Lagos State”, the PDP Publicity Secretary, Taofik Gani, said in a statement on Sunday.

According to Gani, the call for a probe of Fashola by the Coalition Against Corrupt Leaders relating to alleged fraud during the former governor’s administration has vindicated the PDP’s persistent stance that “the Fashola administration was a fluke”.

“Indeed, several times during his administration, we had shouted that the governor was running a propagandist government and that the state was being plunged into avoidable local and foreign debts.

“With over N27bn monthly internally generated revenue, the state does not need to borrow to carry out projects”, the statement added.

The PDP spokesman further claimed that Fashola deliberately embarked on projects that were not feasible in the next 20 years.

“He got loans to complete such projects within eight years only to mismanage and or divert such loans. Under Fashola, the SUREP funds well over N32bn meant for the state could not reflect in any project and was not accounted for. The local and foreign debts of about N1tn is there for Lagosians to pay through over-taxation.

“The PDP has consequently supported and charged Ambode to probe his predecessor. The incumbent governor must speak out now! Anything short of a categorical statement as to whether Fashola is clean or not is a disservice to the state. Lagosians want to know what the new occupier of the office met, especially the actual amount of loan collected”, the statement said.