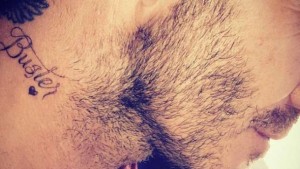 One of the most famous soccer stars of all time, David Beckham, has unveiled his new tattoos.

The former English football captain revealed the neck tattoo on his Instagram page on Sunday, August 30.

The inking was a scrawling of his nickname for his first born with a tiny colored-in heart underneath it.

‘I’ve always called Brooklyn (Buster) since the day he was born… Love you Bust @brooklynbeckham,’ he captioned the photo.

The new body art is the latest in his already-extensive collection of inkings dedicated to his beloved family.

The doting dad only recently had a permanent tribute to his four-year-old daughter Harper inked onto his clavicle earlier in August.

David had the words ‘Pretty Lady’ alongside a little heart, which sit directly above his only daughter’s name, tattooed onto his clavicle.

The sporting legend captioned the shot:

“Hey Pretty Lady…. Just adding to the collection of tattoos that mean so much to me…. Thanks Mark as always looks amazing …shamrocksocialclub.”

He also saved a special mention for his wife-of-15-years as he commemorated their wedding anniversary with a miniature finger tattoo last month.

The inking marks the year they got married – 1999 – and unveiling the sweet tribute on Instagram, he wrote: ’99 was a good year for me.’