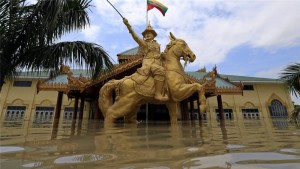 Rescue workers in Myanmar are racing to help tens of thousands of people facing severe floods, as the death toll climbed to at least 46, officials have said.

The country’s Relief and Resettlement Director Daw Phyu told Al Jazeera that at least 217,000 people have been affected in the country, after monsoon rains triggered flash floods and landslides, destroying thousands of houses, farmland, bridges and roads.

He also said that four people remain missing since the floods began.

In the northern Sagaing region, residents said the flood waters caught them off guard as they swept into villages, engulfing homes and fields.