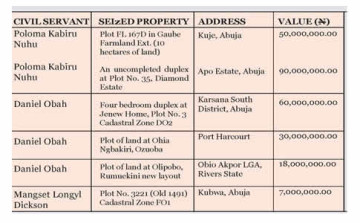 In its renewed commitment to clampdown on “super civil servants”, the Independent Corrupt Practices and Other Related Offences Commission (ICPC), has seized various landed properties and several cars belonging to three senior staff of the Federal Ministry of Niger Delta Affairs.
The three are being investigated according to the commission for possessing properties which are “excessive, having regards to their present emoluments and all other relevant circumstances”.
In a notice of seizure dated August 11, 2015 and signed by the ICPC Chairman, Mr. Ekpo Nta, the commission said that the movable and immovable properties seized from the affected staff were part of the subject of investigations.
The Niger Delta ministry officers listed in the document are Poloma Kabiru Nuhu, Mangset Longyl Dickson and Daniel Obah.
The ICPC by the notice informed the entire public that all movable and immovable properties owned by the aforementioned staff (members) and listed hereunder, are seized.
According to Nta, one of the officers, Nuhu, has 10 hectares of land, covered by Right of Occupancy at Kuje valued at N50m.
He further stated that the same officer has an uncompleted duplex at Diamond Estate, Apo, Abuja, with an estimated value of N90m.
The same officer also has 16 plots of land which are all covered by Certificate of Occupancy in different parts of Gwagwalada, Abuja.
Another civil servant on the ICPC list, Dickson, is said to have a plot of land at Kubwa District, Cadastral Zone, Abuja. The property is valued at N7m.
The third official, Obah, is said to own different plots of land in Abuja and Port Harcourt, Rivers State.
Nta said Obah has a four-bedroom duplex at Karsana South District, Abuja, valued at N60m.
He is also said to have a plot of land at Ozuoba, Port Harcourt, Rivers State.
Other plots of land said to belong to Obah are located in Umuodili Odubo Community in Rivers that is worth N16.5m; Olipobo Rumuekini Layout, Obio Akpor Local Government Area valued at N18m and another plot at Livingstone Estate Umuogodo, Igbo Etche in Obio Akpor Local Government of the Rivers State.
The ICPC boss stated that the notice of the seizure of the properties are “to be served on the appropriate Land Registries and Departments in all states where those properties are situated”.