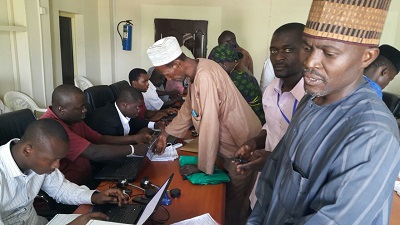 Governor Nasir El-Rufai of Kaduna State has said the ongoing biometric verification of workers will continue until ghost workers are completely rooted out from the state civil service.
The governor had, in his maiden broadcast to the people of the state last month, said his administration had saved N120m in one month as a result of the first verification exercise.
El-Rufai said his administration was determined to clean up the civil service.
The governor, through his Special Assistant on Media and Publicity, Samuel Aruwan, in a statement, announced on Sunday that the state had embarked on the second round of verification of workers in the state.
According to the statement, the follow-up exercise was to authenticate the outcome of the first exercise conducted recently.
Towards this end, Mr. El-Rufai said the biometric verification of all civil servants in the state and local government areas would resume on Monday (today).
He stated that the Head of Service, Mrs. Alisabatu Dada-Onazi, had sent a circular to all agencies and local governments, detailing how the exercise would be conducted in Kaduna, Zaria and Kafanchan.
El-Rufai added that permanent secretaries/overseers, staff officers and other relevant directors were expected to identify their staff and their authentic APP, PSN Secret File Numbers and N Numbers for the purpose of the exercise.
He said, “They should also be at the verification centers to identify the staff.
“For the purpose of documentation, every staff member is directed to present the original and photocopies of the following: Letter of first appointment, letter of present appointment and last promotion.
“Every staff member is required to present any of these four documents for identification: Nigerian National Identity Card, Nigerian National Voters Card (temporary voters card will be accepted), International or ECOWAS Passport; and Nigerian National Driving Licence.
“All civil servants and local government employees must physically present themselves for screening in this second round of the verification exercise as a pre-condition for the issuance of the July 2015 salary cheques”.