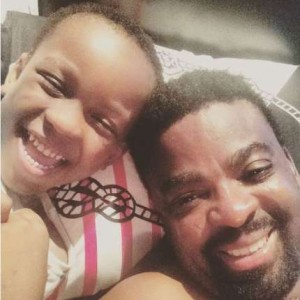 The son of a celebrity is also a celebrity, hence this is new…….hehehehe.

The award winning director sent out a birthday shout-out to his son on Instagram.

“My son Darimisire is 5 today. Happy birthday champion” he wrote in the caption of the selfie of him and his Darimisire.

Kunle Afolayan is married to Tolu Afolayan and they have three kids.

The award winning actor is excited about his new deal, and cannot wait to be unveiled as the brand ambassador. ‘I feel very excited about this and I look forward to the unveiling’, E24-7 Magazine quoted Afolayan as saying.

In July, Kunle Afolayan and Mo Abudu, Tunde Kelani among others  were selected by The International Academy of Television Arts & Sciences (IATAS)  as part of jury.

“Now a member of the Emmy awards academy. Way forward…Can your u beat this kinda gathering? We are all on the Jury for this years Emmy awards. Thanks to Ebonylife for making that happen.”(sic)