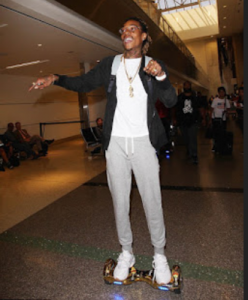 Superstar American rapper, Wiz Khalifa posted a video taken by an onlooker of the incident that led to his arrest.

The photo clearly depicts a swarm of police officers confronting him at LAX (Airport) for simply using a hover-board.

“This? I didn’t do nothing, anyway. What you want to do? Put me in jail because I didn’t listen to what you say?” he says to the cops.

“We can have all the conversations you want to, you can end up on TMZ, destined to become as famous as you wanna be.”

Another video of the incident, whose time stamp reads that it was taken at 3:56 pm PT, shows Khalifa being slammed to the ground on his stomach by three police officers yelling, “Stop resisting!”

Khalifa doesn’t appear to be resisting at all in the video, and is shown lying still on the ground, calmly replying, “I’m not resisting, sir,” as the trio of police officers continue to yell “stop resisting” at him whilst cuffing him and applying pressure to his back.

Khalifa had this to say of the unfortunate episode: