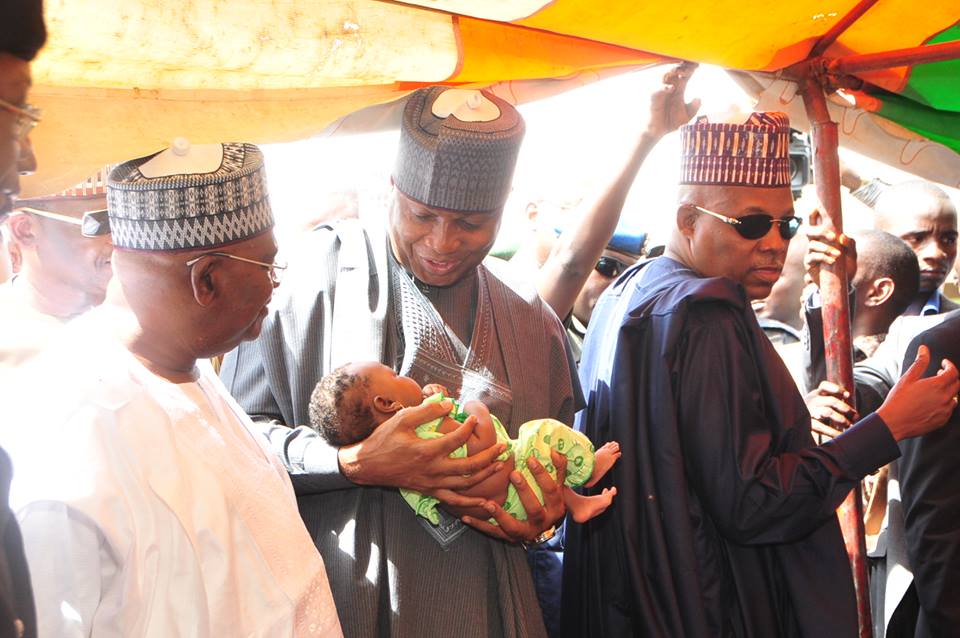 Senate President, Dr. Abubakar Bukola Saraki, has assured the people of North-East that the entire country is solidly behind them in this time of trial.

Saraki said this when he led a delegation of the Senate on a one day on-the-spot assessment of the security situation in Borno State. He also made a cash donation of N10 million for the upkeep of the Internally Displaced Persons (IDPs).

“We have come to feel your pains, to hear what you have been going through firsthand. To seek to understand the severe bloody struggle you have had to endure and go through emotionally, physically, financially and in many other ways which can hardly be put in words,” he said.

Saraki who also led the team, in company of Governor of Borno State, Alhaji Kassim Shettima to pay homage to the Shehu of Borno, Alhaji Abubakar Ibn Umar Garbai El-Khanemi, assured the people that the Senate will do all in its power to ensure that life returns to the state and the Zone.

Saraki later visited the Internally Displaced Persons camps located at the Umaru Shehu College of Education in Maiduguri and the Government College Maiduguri with over 4000 displaced persons respectively.

The delegation also visited the Dalori IDPs Camp housing over 18,000 displaced persons from Bama local government of the state.

He said the resolution of the Senate to send a high powered delegation led by himself was a demonstration of the commitment of the Upper Chamber to find a lasting solution to the plight of people in the North-East.

“We have come to sit with you and listen to you and hopefully together work out solutions that would significantly change your situation for the better. We believe that after this visit your situation will not be the same again.

“The Nigerian Senate and indeed the National Assembly is willing to support you and your families to ensure that your lives return to normal. We could not in good conscience talk to you from Abuja. No. This new senate would rather come here and this is why we are here,” he stated.

Governor Shettima who spoke with an emotion-laden voice while welcoming the Senate President and his team, stated that the visit was historic and unprecedented.

“I would like to express my sincere and profound welcome to the Senate President and our respected and distinguished Senators over this official visit to Borno State, which is the first of its kind by any Senate President since the advent of Civilian Administration in 1999.

“This is a clear manifestation of your concern for the plight of the people of the North-East region and Borno State in particular,” he stated.

Saraki added: “We stand with you against Boko Haram and everything that stands against your security and against your welfare. We stand together with our dear President, Muhammadu Buhari whose singular devotion to ending these senseless killings gives us greater belief that together we will win the war.

“Our president has continued to work night and day to bring this evil of Boko Haram to a permanent end and we reiterate our resolve to ensure that together we succeed.

“We stand with our troops and will in the coming days show them that this new Senate will do all that is within its powers of authorization and approvals, support them and provide for them the necessary funding and oversight that will guarantee that they defeat thus insurgency.

“The 8th Senate has made the security and welfare of our people priority number one on its agenda. We are very conscious of the level of carnage and destruction that has been wrought on the people here.

“We will be working closely with our counterparts in the House of Representatives to make sure that we rebuild the economy of the North-East. We will not rest on our oars until normalcy is returned to this troubled region.”

The governor of Borno State, observed that there are 26 IDP camps in Maiduguri aside those in Cameroon, Chad, Niger and other states in the country.

He urged the National Assembly to pass a Bill that will create the North-East Development Commission to handle the issue of reconstruction, rehabilitation and resettlement of the IDPs and provide employment for the youths as was done to the Niger Deltans.